Heirs of Power by Kay MacLeod 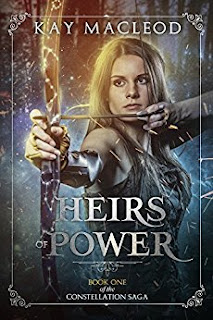 Always in twilight with never-ending lava formations encroaching on the inhabitants, Tenebria was dying.

When the world of the Tenebri began turning into a destructive, fiery land, the inhabitants broke through a magical barrier to safety, in a new land, a New Tenebria, to the kingdom of another people, the Lucidians. But the invaders were not welcomed and they were sent packing by a group of 10 super-beings, Lucidians that had embued the physical bodies of selected humans with their spirits, and enhanced with special gifts and powers. They were known as The Constellations after the special groupings of stars in the sky.

The Lucidians knew that the successful removal of the Tenebri was only temporary – they would undoubtedly try again. So, to remain prepared for the day that happened, the powers of The Constellations are passed on from the original holder to their first child at birth. It would be up to the original Constellation to nurture and train their replacement.

Kitty Fairlow is blissfully unaware of any of this when she and her father stumble upon a portal being opened between this world and Tenebri with a magical urn. Her father, Zander, one of the original Constellations, has told her nothing. At her birth, she inherited his gifts – those of the The Archer. She is sent to take the urn to Princess Judith who rules for her mother the queen in the city of Lanathere. There she meets her first Constellation – Serena Olbridge, The Dancer. The two women set out to bring all the Constellations (The Juggler, The Astronomer, The Swordsman, The Sculptor, The Mystic, The Duellist, and The Scholar) together to once again fight the Tenebri and save the world and the human race.

Heirs of Power is the first book in The Constellation Saga and introduces us to most of the Constellations and their enemies, the Tenebri. The author does a nice job of building the kingdom of Lanathere and adding in the history of the conflict between the Tenebrians, the Lucidians, and how humans became involved. The characters are fun, quirky in some cases, heroic, but still definitely human. This book is recommended for fantasy readers that enjoy a good mission and a hearty saga of a story. I voluntarily reviewed an Advance Reader copy of this book.
Posted by Karen at 2:34 PM No comments: