Draylon – The Beginning by Kenneth Balfour 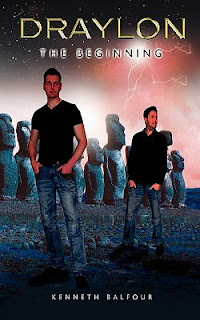 Story excellent, and with some additional attention, this little book could be a real hit.

Draylon, The Beginning is a novelette about an alien-human hybrid sent from his world, Terspheriton, to study human life and civilization. When his spacecraft crashes into the ocean off Easter Island, he makes his way to shore, heals his cuts and bruises and remotely destroys the wreckage of his ship. On the island, he makes the acquaintance of Paul, who had witnessed the crash but believed it to be part of the meteor shower. Together they set off on an around the world adventure collecting parts of an alien amulet left on Earth centuries before by another alien race unaware of plotting against them by Draylon's own people back on Terspheriton.

I will definitely look for the continuation of the story to see how things work out for Draylon and Paul.
Posted by Karen at 6:07 PM No comments: 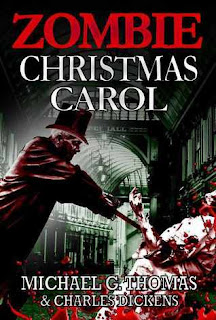 It was interesting to see a zombie story inserted into the classic A Christmas Carol by Charles Dickens with all the beautiful use of language to match. The zombie insertion is quietly done and builds to a nice crescendo.

I appreciated Scrooge's ability for sword work a lot, and the incorporation of minor characters from the original story into somewhat more substantial roles.

Recommended for those that enjoy A Christmas Carol (but aren't going to be put off by the deviation from the original, of course) and zombie mashups.

I believe I picked this ebook copy up for free on Amazon.com.

The Second-in-Command, another short story in The Government Rain Mysteries’ universe, showcases the history behind the character of Guy Hagan, a childhood friend and neighbor of Jed Soloman and his older brother. He pitied and protected the younger, weaker boy (Jed) from the area bullies until the day things went too far and Jed was almost killed. Soon after, Jed’s father died and the brothers disappeared.

Guy remained in the old neighborhood and grew up to eventually join one of the local gangs – The Ravens. As he advances his way up the ranks of the gang, he finds out he’s being watched by the unknown leader of “The Watchroom” – the chief criminal organization in New Hampton.

This series, although titled “Mysteries,” touches a broad range of reading interests (mystery, urban mystery, mutants, horror, sci-fi, dystopian, urban horror). There is something for almost everyone.

The rain changed Reinhardt – for the better. His body, his strength, his senses all improved when touched the rain that constantly soaked the city. But the city of New Hampton was imploding – only no one really understood that yet. Society was crumbling, and the city leaders were clueless (or uncaring). The city infrastructure couldn’t stand up under the influx of more and more homeless or the lawlessness that increased day by day.

The Lone Vigilante is a glimpse into the beginnings of the mysterious protector of what is left of New Hampton (and featured in The Rain) and simply known as Reinhardt. In this side story to The Government Rain Mysteries series by L.A. Frederick, Reinhardt and an old friend test his new-found abilities on a gang of criminals operating out of “The Watchroom” called "The Deadeyes.”

This story and series, although titled “Mysteries,” touches a broad range of reading interests (mystery, urban mystery, mutants, horror, sci-fi, dystopian, urban horror). There is something for almost everyone.

The Skeleton Song (The Hollows #0.5) by Angela Kulig

The Skeleton Song is a prequel to Skeleton Lake, the first novel in The Hollows series by Angela Kulig.

The story is told from the viewpoint of a girl named Cassie about her VERY complicated relationship with two brothers, Raiden and Conrad, and gives some needed background and understanding for what's to come in Skeleton Lake. The writing is lovely. The story is mysterious.

Well worth reading before the full-length novel next in the series.

When Marlow shows up unexpectedly at a party and discovers that her boyfriend and best friend are a couple, she’s distraught. When she realizes everyone already knew this but her, she publicly humiliated and runs away, hysterical and hopeless, thinking to end it all in the lake. The next thing she knows she wakes up, being taken care of, in the bed of Raiden Mast, a boy from her school. She’s surprised and confused but even more so when Raiden tells her “Last night you ... died.” And thus, begins this highly imaginative and addictive story of the “Skeletons” of Skeleton Lake, the “Hollows,” and the “Fleshies.”

The Skeletons are former humans (Fleshies.) As children they had been sick and brought to Skeleton Lake where they are freed from their incurable bodies in the waters of the lake. To everyone else, they still look, act, and age like a human but they depend on the special water of the lake to heal their flesh-like coverings, their colorful glowing bones underneath, and maintain their strength. They mingle with the locals, go to school, shop, whatever, yet still pretty much keep to themselves living around the lake (which to human eyes appears to be a giant cornfield.) Skeletons only possess one half of a soul: sharing it with their intended life companion. If a Skeleton couple has a child, it will not have a soul such as their parents and are known as “Hollows” and seen as inferior. When a Skeleton dies, their half of the soul goes to a “replacement.” Marlow is the replacement for Cassie, the Skeleton girl who committed suicide when she became entangled with the “Hollow” Conrad, the brother of her intended, Raiden.

Just as Marlow is beginning to understand her new life and her feelings for Raiden and Conrad while keeping her parents in the dark, unexpected danger from outside arrives. Hollows from a distant community try to kidnap the young women of Skeleton Lake to take them back to their leader for breeding purposes.

The story is complicated and fascinating and just the beginning of this exciting, and totally different, series. This is recommended for readers that enjoy young adult, paranormal, and horror genres.

I voluntarily reviewed an Advance Reader copy of this book.
Posted by Karen at 4:06 PM No comments: