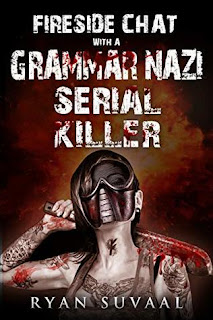 How do you bring yourself to write a review of a story about a reader that murders writers who publish their work without performing the proper due diligence of editing for grammar? That’s just intimidating...

But it is also an entertaining and funny story! Seventeen murders down and now the Grammar Nazi Serial Killer is a guest on Courtney X’s dark web talk show. With its interview style format, author Ryan Suvaal unfolds a thriller of a tale of horror that will also make the “Grammar Nazi” in you laugh out loud (and wonder if maybe it isn’t time to brush up on your own skills.)

I couldn’t possibly give this story fewer than five stars. I wouldn’t dare.
Posted by Karen at 9:01 AM No comments:

The Lost Boy (The Mutant Rain Origins #5) by L.A. Frederick 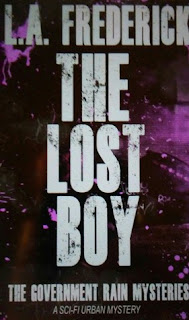 The Lost Boy gives us a glimpse into the life of the mutant, Isaac, after he’s escaped the company of Dr. Zhirkov and Darkmore. Hiding out in a series of fleabag hotels in the inner city of New Hampton until the girls in the black garb catch up with him, he’s always on the run.

This night will be no different. After “convincing” the seedy hotel manager of his current flop that he can stay another week without paying, Isaac retrieves his room key and goes to bed. But gunshots from the area of the front desk awaken him and he knows he’s been found again. He escapes from the first set of guards (the girls in black) through the use of his unique “talents” only to be trapped in an alley by Darkmore and more guards from the Newton Street facility.

The Lost Boy will give readers a better understanding of Isaac, a main character in The Mutant Rain series. It’s outstanding, and I have a much better picture of the boy that Isaac was.

This series touches a broad range of reading interests (mystery, urban mystery, mutants, horror, sci-fi, dystopian, urban horror). There is something for almost everyone.

The Fall (The Mutant Rain #2) by L.A. Frederick 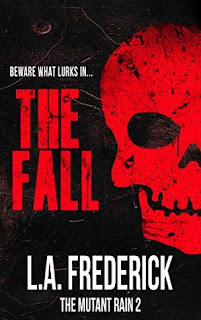 Having found safety with a meager number of other survivors from New Hampton in an underground hideaway dubbed The Bunker, the mutants Connor, Reinhardt, Isaac, and Benjamin decide that their small number will be no match for the hordes of zombies or Dr. Zhirkov’s people. One after the other leaves to find more survivors and more mutants to supplement the group.

When they fail to return after 2 days, Aurora and Evaline head to New Hampton to find them leaving behind the weakest of the survivors and, unknown to them, one of Dr. Zhirkov’s secret moles. In the city, they meet up with a small group of survivors led by Detective Benjamin Farrow, Aurora’s former partner on the police force.

Integral to The Fall is the revelation of Dr. Zhirkov’s back story and that of his men, Vitaliy, Dmitri, and Victor. Readers get a much fuller picture of what Dr. Zhirkov is about and a better understanding of the extent of the mutation that is occurring throughout the world.

The Fall continues the highly imaginative and entertaining tale by L.A. Frederick which began in The Rain. Part horror, mystery, AND romance, it is a dystopian story that’s got everything. However, I recommend readers begin with The Rain (The Mutant Rain #1) as well as the Mutant Origins short stories before tackling The Fall. 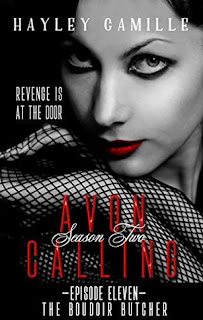 Our favorite Avon Lady is back!

With Donald Pinzolo in custody awaiting trial, you’d think that life would settle down for Betty Jones, her darling husband, George, and their two children. But this is wartime and George has received his notice to report for induction training and will be leaving soon. Daughter Nancy is coming into her own powers and is pressing her mother to teach her how to use them. NYPD Sergeant (and friend) Jacob Lawrence needs Betty’s help to catch a possible female serial killer. And Betty, herself, is under the scrutiny of the FBI who are trying to figure out just who (or what) she really is, determine how she fits in with numerous criminal schemes around town, and how to exploit her talents.

In this episode, Betty confronts Jacob’s former girlfriend, Adina Sonberg, a key witness in the upcoming case against Pinzolo, to convince her to await her testimony at a safer location than her aging parents’ home, when she suddenly comes face to face with his deadly minions herself.

The Boudoir Butcher is a delightful start to another Betty Jones adventure. There are recurring characters and continuation of the Pinzolo storyline from Season 1 but some fun and interesting new faces as well and an intriguing new serial killer plot is introduced. The city setting and the flawlessly atmospheric 40s timeframe just add to the pleasure.

I highly recommend the entire Avon Calling series but start reading from the beginning with Episode 1 - A Woman’s Work is Never Done for maximum enjoyment. 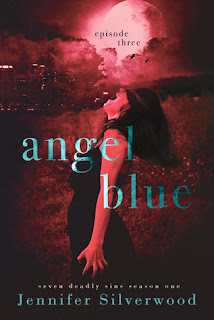 Successfully freeing two Cursed prisoners, Odin and Charon, from the torture chamber/dungeon of the House of Gisnu, Anu returns to Wil in the secret, secluded cabin. Exhausted, she falls into his arms. While the intimate night means everything to Wil, the next morning she tells him that she will not be leaving with him but will instead return to the castle and her guardian, Etlu. Anu has always loved Etlu, and her plan is to convince him to run away from it all, and live out their days together. But Etlu has other plans.

Continuing the story where it left off in Episode 2, this installment brings to life the shared history of Anu and Etlu, and really fleshes out some of the other characters especially that of Wil’s sister, Isabol. As the story is presented from multiple points of view, we are able to get a much more solid picture of who they are, how they fit into the story, and their relationships with everyone else.

The plot is slow-building but with constant action as you begin to piece together this world and its history. Silverwood’s writing is vivid and exciting: you can feel the cold of the frigid Canadian north as well as the heat between Anu and Etlu.

This is not a standalone story. I can recommend the entire series so far with each episode read in sequence (and preferably with not a lot of time lag in between the reading of each!)
Posted by Karen at 3:47 PM No comments: