Murder at the Pool Party by Sandi Scott 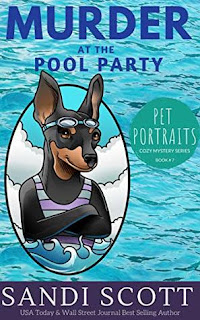 Twin sisters, Georgie and Aleta Kaye, are involved in another mysterious death!

After a less than perfect date with her friend, Obby, Georgie decides to expand her circle of acquaintances by joining an online singles group, Excellent Over 50. As it happens, the group is planning a pool party for the following day at one of the founding member’s gorgeous Winnetka home. Georgie drags Aleta along to broaden her horizons as well. The party is lovely with champagne, swimming, and an awesome lunch which includes a 20-foot long sweets table.

While there the sisters meet some interesting new people and observe a little drama-in-the-making when one of the older men shows up with a 20-something date who is looking daggers at one their new friends, Maren Ingrid. After the meal begins, they see Maren and the older man slip upstairs together away from the rest of the party. Maren returns a short while later feeling ill so the hostess, Beth Bonomolo, calls for an ambulance. Beth receives word later that Maren died at the hospital. So, the sisters are once again at the scene of a mysterious death and Georgie is compelled to find out what is behind it.

I love this series. It’s short, it’s sweet, it’s simply fun. Georgie doggedly works her way through the murders and attempts to find a balance in her relationships with her ex-husband, Stan, and friends such as Obby. As with the previous books, the settings the author presents are interesting and comfortable at the same time. The dialogue between the two sisters continues to be snappy and entertaining. This book is recommended for readers of cozy mysteries, especially those that enjoy later-in-life protagonists.

A Curve in the Road by Julianne MacLean 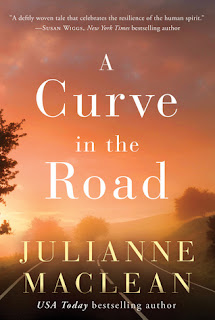 Abbie had a premonition that something bad was about to happen.

Dr. Abbie MacIntyre has just started the hour-long drive back home after Sunday dinner with her widowed mother when a car crosses the center median of the highway careening into Abbie’s SUV and sending it off road, rolling over and over until landing in the bottom of a ravine. She is successfully extracted from the wreckage and transported to the nearest medical facility suffering a minor head wound. The driver of the other vehicle, reeking of alcohol, is in the same unit and in far worse condition awaiting airlift to a proper trauma hospital.

Abbie’s mother comes to her daughter’s side and both repeatedly attempt to contact Abbie’s husband, Dr. Alan Sedgewick, to notify him of the accident. (Abbie was supposed to have met him that evening at their son’s hockey game.) They are unsuccessful until emergency workers deliver the personal items of the drivers retrieved from the accident site to the hospital and Alan’s cellphone is discovered among the detritus. To everyone’s shock and horror, the drunk driver is Abbie’s own husband!

This is just the beginning of A Curve in the Road by Julianne MacLean. Once I started reading this book I didn’t want to put it down. The story is emotional and full of surprises as family relationships and secrets are revealed in the aftermath of the accident. Abbie’s perfectly normal life will never be the same again as the answers to how and why her loving, cardiologist husband who rarely drank even a glass of wine was driving drunk and was not headed to their son’s hockey game. This book is recommended to readers that enjoy a contemporary setting with romantic plotlines of betrayal, forgiveness, and second chances.

OH, and it features an awesome golden retriever as well.
Posted by Karen at 2:35 PM No comments: 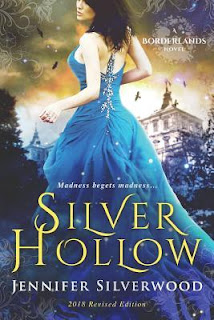 Amie Wentworth buried her beloved parents ten years ago and in the ensuing time had built a life and a growing career as a novelist. Returning home one evening from a welcome home party for one of her best friends, she’s attacked and fatally stabbed by a man who’d been lurking in the darkness by her doorway. She’s rescued and miraculously healed by a mysterious, dark stranger she’d seen lurking around town that day who then fades away into the shadows.

The following day, she leaves town without a word to her friends to travel to Wenderdowne, her ancestral home in England at the request of her Uncle Henry, a man she’s never met and whose invitation and traveling preparations had conveniently arrived, unbidden, the previous day.

During the train trip from London to Wenderdowne, she is once again attacked but makes her escape with the help of Emrys, the same man who had saved her before.

Finally reaching her uncle’s home, a dark and crumbling estate in the middle of nowhere, she discovers that her life back in East Texas had been one elaborate lie. She had been taken away as a small child from her rightful place in the family by Durstan, her father, and “glamoured” into forgetting her previous life and believing the new, made-up one, to save her life from those that wished her dead.

Wenderdowne is located in Silver Hollow is a different world, an alternate world from the one she’s known for the past 20-something years. Magic and magical creatures exist, and Amie must uncover her own magical powers with little help from those around her. Confused, somewhat homesick, and not know who to trust, Amie struggles to come to grips with her life. Information comes at a decidedly slow pace. However, when she and Emrys slip away from Wenderdowne for what was to have been a quiet day out, Amie starts to regain her memories as she encounters other people and places from her past. And then things really start to happen.

I really enjoyed the mix of modern, fantasy, and myths that the author has woven together to create Silver Hollow and the Borderlands. Amie is a likeable heroine and Emrys is dark and sexy and mysterious. I loved her grandfather, Arthur. And was emotionally shocked over Brillig Toadstool. I have not read many stories involving King Arthur or Merlin nor those involving mythical creatures such as unicorns, so their appearances were a surprise and delightful in how they were presented: new to me and very entertaining.

I recommend this book to readers of fantasy that is mixed with ancient myths and those that enjoy romance in their fantasies as well. This is the first book in the Borderlands Saga and I now look forward to the next one.
Posted by Karen at 9:21 AM No comments: 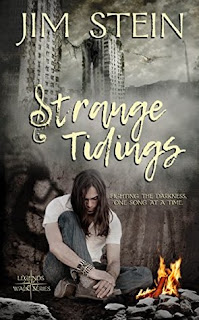 After the C-12 virus struck, surviving humans were left to cluster into crumbling populations center such as New Philadelphia and slowly try to regroup into some semblance of life. Recovery was hampered by the discovery that many of the survivors were no longer capable of having children; only a few families had retained the ability to procreate. Those that could reproduce did and allowed some of their babies to be adopted by couples that could not.

Among the babies that were adopted out is Edan Johnson and his “sister,” Piper. Brought up in New Philadelphia, “Ed” is an aspiring musician and through a connection of his sister’s, he has landed his dream job at the local recording studio where he works with station engineer, Billy. One evening after the day’s business, Ed is using the station equipment to produce his own recording when he is interrupted by an odd, old man named Koko. Ed had previously encountered him at the farmers market across town and had received a strange coin from him. Additional sightings over the next couple of days, both in person and in dreams, finally reveals that Koko holds a significant place in Ed’s past and future.

Billy, too, has dreams. He’s a member of an up-and-coming band that is on the verge of making a name for themselves and possibly revitalizing the lost music industry. When Ed goes to hear the band play for the first time, he is drawn to their mysterious and complicated bass player, Quinn.

Strange Tidings is the first book in author, Jim Stein’s, Legends Walk series. The storyline is complex creating an entire world of post-virus America. I found it to be exciting and fresh in its use of native American mythology to draw in a paranormal cast of characters (which was new to me.) The complexity of the initial world-building provides several intriguing options for additional books to come. I highly recommend to readers that like young adult, paranormal thrillers, and native American legend tales incorporated into modern times.