Murder at the Bonfire by Sandi Scott 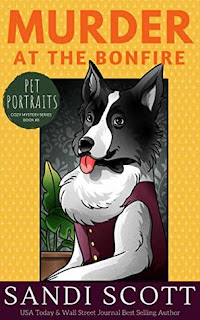 In lieu of payment for the portrait of a majestic Great Dane, Georgie Kaye gets an all-expenses paid weekend at a nature preserve and resort outside of Chicago. Renown for its maple ice cream, Georgie and sister, Aleta, pack up her aging Volkswagen, Pablo, and head off for some fresh air and a change of scenery.

While scoping out the dessert offerings at the lodge, the sisters observe the resort manager, Joyce Reid, publicly and unmercifully dressing down Merv, the maintenance man. Afterwards they find out from hunky Park Ranger Luke Holt that Merv has been at the resort for over 20 years but has had a hard time coping since his wife passed away.

When Joyce’s body is discovered floating face down in the lake, the sisters learn that there isn’t a single staff member mourning her death. With hints of satanic goings-on in the woods and an attack on Aleta herself, the sisters, Georgie’s ex-husband Stan, and Ranger Luke (Aleta’s new beau) join forces to find the killer.

In this eighth entry in Scott’s Pet Portraits cozy mystery series, Murder at the Bonfire focuses a little more attention on the relationships of the sisters rather than the build up and eventual solution of the murder. Georgie continues to struggle with her feelings for ex-husband, Stan, who left her in the lurch with children still at home when he went midlife crazy. She loves him but she’s still not over the hurt and memories of that betrayal. On the other hand, Aleta is starting to look forward rather than remaining sunk in a pleasant past and memories of her long and comfortable life with her deceased husband, William. The murder mystery is simple and straightforward. New characters and settings help in advancing this charming sisters’ story.

Recommended for cozy mystery readers and those that enjoy reading stories with older, but not necessarily elderly, protagonists figuring out what’s what.
Posted by Karen at 10:25 AM No comments:

The Sigma Surrogate (When Tomorrow Calls) by J.T. Lawrence 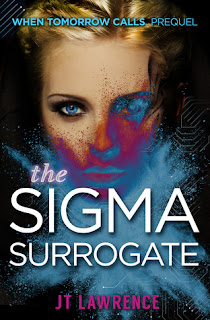 The Sigma Surrogate is actually the kick-off to J.T. Lawrence’s When Tomorrow Calls series set in a not-to-distant-future Johannesburg, South Africa. Birth rates have dwindled to a point where only very young women are capable of conceiving. Girls deemed the best of the best are recruited into the Surrogate Sisters, a cloistered group that produces offspring to keep the human race from eventual extinction.

Keke is a journalist working for the Echo newspaper still yearning for her big break – that career-making big story. She believes she’s finally found it when she receives an anonymous tip that of the Surrogate Sisters has been attacked and almost killed by a bomb planted inside their ultra-high security compound. And after meeting the young, injured SurroSister identified only as “Sigma,” she is determined to investigate what happened, uncover the truth about who would hurt the young woman, and, of course, break the story of a lifetime.

Along with her best friend, Kirsten, Keke calls upon her numerous high-tech (and underground) resources to get to the truth. However, what she uncovers goes much farther than she imagined and endangers everyone involved with her.

Such a good story with a strange and wonderfully dystopian world created to serve as the backdrop for all the action, intrigue, and romance. The characters are fun and well developed and the action is continuous in this futuristic setting. This story made me go immediately to look for more in the series.