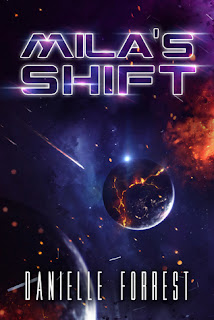 Shapeshifters were outlawed, and when Mila suddenly went through her first shift after partying for her 21st birthday, she ran leaving everything and everyone she knew and loved behind. But after 10 years of hardship in hiding, Mila’s best friend, May, reached out to her to meet. They’d been as close as sisters, had dreamed of being space pilots together, so Mila goes. Leaving their reunion, the girls are attacked and May is killed. Unable to go to the police for help, a grieving Mila buries May but when she discovers May’s ID and upcoming assignment as a pilot on the soon-to-depart USS Orleans spaceship, she assumes her identity.

The Orleans' mission is to deliver diplomats to the first ever meeting with another intelligent life species. Not everyone wants this meeting to occur though and there are conspirators hidden among the crew that intend to stop the Orleans at all costs. Also, there is a shifter on board trying to kill Mila because they believe May is still alive and she had discovered the plot to prevent the meeting.

This was a fast and fun book with loads of action and romance. I couldn't put it down! The mysterious shifter evades capture for quite a while and the tension builds while he continues to hunt May/Mila. There is quite a collection of interesting characters populating the Orleans including Mila’s grumpy roommate and a coworker working through gender identity. It appears to be the start of a new series so I will be looking forward to more about these characters.

I would recommend this book to anyone that enjoys a lighter SciFi read and perhaps suggest it to shifter romance readers that may want to stretch their genre reading into SciFi. This book is not scheduled to be published until September 15, 2019.

Bug Out by Charlie Dalton 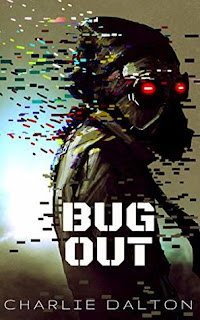 In the not too distant future, humankind has found our way off planet and into interstellar exploration for resources the Earth can no longer supply. That’s when we discover we are not the only intelligent life in the universe, and the other species is also exploring and exploiting their findings for the same resources.

Bug Out is cleverly told in alternating chapters of current action and an overheard conversation between two unknown speakers that builds the back story for that action. The author has created a tight and exciting narrative that builds tension throughout. The truth behind the scenes are slowly revealed with ingenious twists. I was thoroughly entertained. I will be “book talking” this novella to all my family and friends, and looking for more in the genre from Charlie Dalton. 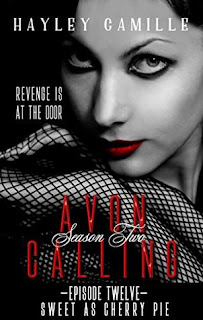 Episode 11 left super Avon lady, Betty Jones, surrounded by a gang of Donny Pinzolo’s hired thugs. She’d been at Adina Sonberg’s home convincing that young lady that protective custody really was necessary for her continued good health and ability to testify on behalf of the government in the near future when she was lured into an alley by one of the thugs. They had no clue what trouble they’d hired on for though. Betty takes care of business but not without attracting some attention from the neighborhood and the officers stationed in front of Adina’s door are sent to investigate leaving it unguarded. Betty, realizing that the attack had been just a distraction to remove the officers, hotfoots it back to Adina’s just in the nick of time to avert the attempt on the lives of the entire Sonberg family.

Back home, life goes on as George prepares to leave on the morrow for his induction training in the war effort. He’s starting to remember bits and pieces of the events leading up to his “accident” that left him with his amnesia. Betty knows that it is going to be traumatic for everyone all around when George regains his memory but for it to happen on the night of his departure would be devastating.

In the meantime, Jacob Lawrence is working long, hard hours to both safeguard his former girlfriend, Adina Sonberg and apprehend the city’s latest threat - “The Boudoir Butcher.” Although, he is still invested in a relationship with her, they are a long way from where they were. He’s committed though and has accepted Betty’s help to protect her and free himself up to pursue the serial killer.

Betty is keeping her ear to the ground and makes a long overdue visit to her clients at Kitty’s Kat House to plug into the gossip of the city’s seedy underbelly. While talking with one of the girls there (Tilly), Betty experiences some frighteningly weird visions that may actually be the thoughts and memories of “The Boudoir Butcher” HERself!

As the latest story about “The Boudoir Butcher” unfolds, readers are treated to the flavor and lingo of 1940s wartime. The author successfully recreates the atmosphere and feel of the time and it just envelops you. We check in on many of the characters from the previous episodes including the ladies of Kitty’s Kat House whose circumstances have upgraded somewhat under the management of Madame Trixie (although it is still just a desperate means of survival during those hard times for these women.)

As this series continues to flourish, it continues to entertain and delight. I highly recommend this entire series.