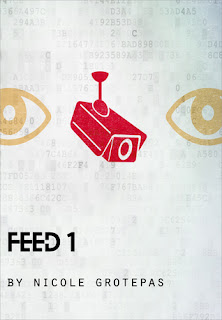 Originally imagined and developed to let the blind see, tiny, wireless cameras now roam the spaces and the lives of the residents of the U.S. filming lives and movements and broadcasting it all online for anyone to watch. The cameras’ inventor, Sam Ramone, had expanded the functionality from the medical arena to this total invasion of everyday life after massive home-grown terrorist attacks had been launched targeting thousands including his own children. Now, no one would ever be able to plan or execute such a threat again. However, Ramone never intended, nor imagined, the total invasion and televised results all in the name of entertainment. People were addicted to ‘the feeds’ as they were called: both appearing in them and viewing them. And now Ramone has had enough. But even as he works to undo the damage he made possible, he’s being watched himself.

In Feed 1, the first book in the Fooko series, author Nicole Grotepas has created a future U.S. where everyone is under constant scrutiny, and anyone can become ‘a star.’ Some watch ‘the feeds’ and vicariously share the lives of others. Some crave the attention of the viewers at the other end of ‘the feed’ and change their actions and their lives just to up the number of people following them. The story is peopled with regular characters that are feeling the pressure of the impact of ‘the feeds.’ But there are forces at work to keep the new status quo in place.

This story is highly recommended for sci-fi readers and anyone that has ever found themselves lost down a YouTube rabbit hole for an untold amount of time. 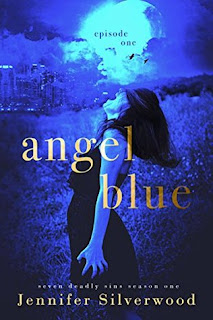 In Angel Blue, Episode One of author Jennifer Silverwood’s new paranormal series, Seven Deadly Sins, we are introduced to Anu, the last of the House of Eanna and a princess of the “Chosen” as she celebrates her ‘20th’ birthday at some human dive bar (she's actually around 1200 human years old.) She meets, dances, and shares a smoldering interlude with sexy Wil of the emerald-flecked eyes and broad shoulders. This does not end well when his companion, Izzie, discovers them and we find out that neither she nor Wil are human either. They are the “Cursed” – creatures that centuries before had murdered all the members of the House of Eanna and burned their castle to the ground – and they are hunting Anu as well. The dive bar burns, trapping many of its occupants inside. Anu and her guardian, Etlu, escape but are soon tracked down and surrounded by Wil, Izzie, and the rest of his group. They fend off their attackers and return to the home of Lady Tiamata, the House of Gisnu, where they are awaiting the arrival of Malku, the self-appointed leader of the “Chosen” and the man Anu is to wed. Betrothed at birth, Anu is not in favor of the union. Malku is known as a cruel man and she has loved Etlu for years. She plots to escape the House of Gisnu and persuade the honorable Etlu to run away with her. However, the “Cursed” ones are not done. The attack at the bar was only a single skirmish in a much more elaborate and longer developing plan to wipe the “Chosen” out entirely.

I enjoyed all the characters introduced so far especially Anu, Etlu, and Wil, and will most definitely be looking for Devil Red, Episode Two to find out what happens next. I am still in the dark as to who or what the “Chosen” are and the back story remains shadowy for me. The “Cursed” seem to be werewolves of “shifters” of some kind. I am willing to keep reading under the ambiguity because I’ve enjoyed this author’s previous work, but it’s not comfortable, and this may not be for every reader of fantasy out there. But the writing is SO GOOD, the characters so compelling, and the plot keeps slowly unfolding, and for now, I’m happy. 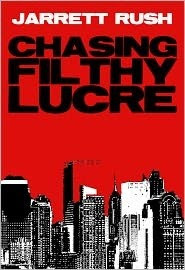 Dirty, edgy, and lots of action!

In a grim future America, one company, RomaCorp, provides all goods and services to the city of New Eden. The city had become what it was after a bunch of young idealists had taken over the in-situ government with theories that sounded good on paper but, in practice, failed after a mere eighteen months. The leaders of New Eden had come on television one day and said everyone was just “on their own.” Now the population of the city was scraping by in a dirty existence to fund their next hookup to “the wire.”

Weber Rexall had been a soldier and then a cop when the collapse happened. Now he eked out a living doing exhibition fights where sometimes he played the part of the winner, sometimes the loser. Tonight he’s paired against Johnny “The Kid” Berger, and is scheduled to be the victor.

Between his appearances in Raul’s basement fight ring, Rexall sidelines as a bodyguard for a data runner named Carroll. Carroll’s shop downloads critical or sensitive data into human data runners, and Rexall escorts them to the recipient of the data where it is uploaded and removed from the human carrier, a financially beneficial exchange for both the runner and the escort.

Rexall, impressed with Berger’s skills, includes him in this lucrative endeavor, but their very first job doesn’t go well, leaving the data runner dead, Carroll near death, and his shop destroyed by RomaCorp. With the help of a Serve-O named Simmer Jones, Rexall and Berger set out to make things right. Or at least as right as they can. Clocking in at a little over 100 pages, Jarrett Rush packs a lot of awesomeness into Chasing Filthy Lucre, this first story in the New Eden series. I loved the noir styling, the dark, itchy setting, and the characters that combine to tell a really good story. This is recommended for readers that like dystopian, urban storylines with all the grit and dirt and unsettling edginess.
Posted by Karen at 9:58 AM No comments:

The Girl in the City by Philip Harris 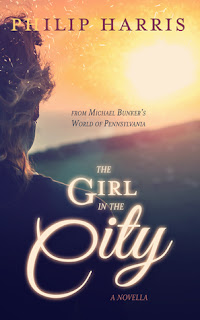 What an exciting kick-off to this series! And what a cliffhanger!

By night, Leah King scavenges through the backways of her city and the surrounding wastelands for items that her father can trade for food, clothing, and other essentials. After one such foray, she finds herself in the middle of an attack on a young man by the Transport Authority (the city’s governing and enforcement entity.) As he lays dying, the young man pushes the leather bag he’s carrying toward Leah with a whispered “Please …” for her to take it.

Hoping for some good salvage, Leah takes it to her father. But when they open it, they find only one item – a green rectangular object resembling a circuit board encased entirely in clear plastic and marked with strange symbols. An exhausted Leah retreats to her bed, but before she can fall asleep, she overhears her father talking to someone on the phone and leave the house.

Later, when he has still not returned, she slips out to try and find something she can salvage. She is caught stealing from the food wagon of an old Amish man who instead of turning her over to the Transport Authority officials urges her to keep the food and tells her where he can be found while he’s in the city should she get into any trouble.

When everyone leaves, she removes it to her secret hiding place located in the tunnels beneath the city, evading a scarred-faced woman who doggedly tried to follow her as she made her way through the neighborhoods, market, and back alleys to her destination. Desperate to free her father from the Transport Authority, she goes to the temporary lodgings of the old Amish man where she learns the significance and purpose of the strange object.

This introductory story by Philip Harris is an exciting setup for his Leah King series. Though short, a lot of ground is covered in building Leah’s world and the characters that populate it. It is dark and gritty, and filled with shadows, intrigue, and danger starting with Leah running for her life in the very first scene. I’m really looking forward to reading the next book in the series, The Girl in the Wilderness. This book is recommended for those that like young adult post-apocalyptic/dystopian tales.
Posted by Karen at 11:29 AM No comments:

The Bottle Stopper by Angeline Trevena 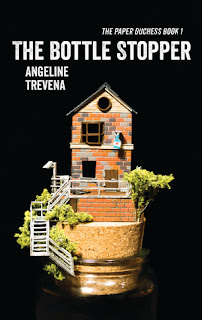 When Maeve was six years old, her mother was taken away by the authorities for crimes against the state. Since that time she lived with her Uncle Lou, a horrible, abusive man that runs a sham of an apothecary. Maeve’s job is to scavenge old bottles from the nooks and crannies and alleyways of the “The Floor,” the poorest slum of the city of Falside where they live, and fill them with medicine to sell in the shop. In reality, the “medicine” is the polluted water from the local river and a sprig of whatever plant material she has gathered. It is a grinding existence until Topley and her loving parents open the bakery next door.

Topley’s family gives Maeve a vision of another life that she, too, can have once she turns 18 leaves Uncle Lou. But when Topley suddenly falls ill and her desperate mother resorts to some of Uncle Lou’s medicine, Maeve’s dream of a better life changes to one of revenge.

Maeve’s world of Falside is grim and bleak where women are restricted and controlled and viewed as property. The birth of female children has, unaccountably, become a rare occurrence, and leaving Falside is viewed as treasonous and punishable by death. But there is a glimmer of revolution here and there such as in “The Paper Duchess,” an old bookstore off the beaten path, where Denver, Kerise, and Tale try to discover what happened to Maeve’s mother.

The Bottle Stopper is a dark and well-developed beginning to The Paper Duchess series. It is recommended for readers that enjoy dystopian tales and those with similarities to Margaret Atwood’s The Handmaid’s Tale.