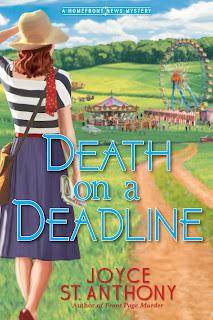 As World War II rages in Europe and the Pacific, the small town of Progress is doing its part for the soldiers in the field with a war bond drive at the annual county fair. Town gossip Ava Dempsey rumors that Clark Gable will be among the participating stars. Instead of Gable, the headliner is Freddie Harrison, a B-movie star. When Freddie turns up dead in the dunk tank, Irene Ingram, editor-in-chief of The Progress Herald, starts chasing the real headline.

There are plenty of suspects and little evidence. Ava’s sister Angel, who was married to the dead actor, is the most obvious. The couple had argued about his affair with the young starlet Belinda Fox, and Angel was the last person to see Freddie alive.

Irene discovers there’s more than one person who might have wanted Freddie dead. As Irene draws on her well-honed reporter’s instincts to find the killer—nothing is what it seems in Progress, and now her own deadline could be right around the corner.
CLICK TO PURCHASE!
| Amazon | B&N | Kobo | Penguin Random House |

Before I write anything, my mother insists that I thank you for having me on…what do you call this thing? Blog? That’s a very strange word. It’s like an article my big sis Irene writes for our Pop’s newspaper except it’s not on paper. Anyway, thank you. Mom almost had a conniption because I don’t know your name. And if I did, she’d insist I’d use Miss, Mrs., or Mr. and your last name. She doesn’t like it if I call adults by their first name. She’s so old fashioned! We’re almost in the middle of the twentieth century and she still thinks it’s 1920 instead of 1942.

Now that’s all settled, my big sister, Irene is the editor-in-chief of the Progress Herald. Pop owns the paper but right now he’s in the Pacific working as a war correspondent. Irene is doing a great job running the paper. Last month she even published some of the drawings I made to publicize the town victory garden. And I just drew a bunch of posters for our county fair. It’s going to be so exciting! There are real honest to goodness movie stars here in Progress for a war bond drive! Clark Gable couldn’t make it, but the other stars are glamorous, too. Miss Ava Dempsey owns the beauty shop, and her sister Angel Harrison is one of the stars. So is her husband, Freddie Harrison—he seems like a real troublemaker. You should have seen the argument they had in Dempsey’s Diner when Irene and I went in to hang up the posters I made. Miss Dempsey’s and Mrs. Harrison’s pop owns the diner and he pulled his shotgun on Freddie! He threatened to kill him but I don’t think he meant it.

One of the other stars is Kirk Allen. He is a dreamboat! And he’s so nice. I can’t believe he actually went to Progress High School with Irene. He’s handsome enough to almost make me forget about Frank Sinatra. I still like his music and everything and I’ll keep his autographed picture on my wall, but Kirk is the cat’s meow.

Well, I’d better sign off and get ready to go help get things set up for the fair. My best friend and I are manning the cotton candy booth at the county fair. Irene did the same thing when she was in high school. The stars are going to rehearse and I can’t wait to watch. Irene will be writing all about it for the Progress Herald. It’s so exciting!

ABOUT THE AUTHOR:
Joyce St. Anthony 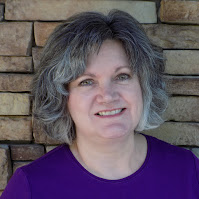 was a police secretary for ten years and more than once envisioned the demise of certain co-workers, but settled on writing as a way to keep herself out of jail. In addition to the Homefront News Mysteries, she is the author of the Brewing Trouble Mysteries and the upcoming Cider House Mysteries written under her own name, Joyce Tremel. She lives in the beautiful Laurel Highlands of Pennsylvania with her husband.
| Website | Facebook | Twitter |
| Amazon | BookBub | Goodreads |