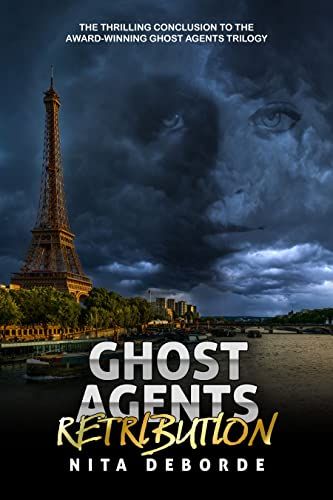 The Bureau for Historical Preservation
is under attack.

The sinister, secret organization known as The Syndicate has finally stepped out of the shadows and made their presence known with a dramatic demonstration. In the aftermath of these shocking events, Claire Abelard and her fellow agents travel to the Bureau’s international headquarters in Paris, France in hopes of launching a coordinated response to the attack.
But something isn't right with Claire. The acumens she has relied on her whole life have gone haywire, endangering not only the mission but also everything she holds dear. As the scope of the Syndicate's plan unfolds, Claire must use every resource at her disposal to try to stop them... but will it be enough?
Find out in this thrilling, final chapter of the award-winning Ghost Agents Trilogy.
| Amazon | Barnes & Noble | Indigo | Kobo |

Excitement and danger are on every page as the City of Lights plays host to this final chapter in the GHOST AGENTS TRILOGY!

Ghost Agents: Retribution is the third and final book in the outstanding Ghost Agents Trilogy, and folks at The Society for Historical Preservation certainly conclude business in style! This time, the action moves from Galveston and Boston overseas to The City of Lights, and author Nita DeBorde really brings it with an insider’s knowledge of the famous city. With the seamless inclusion of French dialogue (and English translations) and truly iconic sights around every corner, the reader will feel they are on the streets of Paris alongside agents Claire Abelard and Drew Mitchell. The author even slips in some delightful tidbits of history as our heroine and hero traverse the city, talking to well-known former residents.

Claire is such a good-hearted person, and protecting the projections from harm, especially unethical living human beings, is always foremost in her actions. That continues to be her goal here, along with saving the rest of the world from the bad guys. She’s surrounded and supported in her efforts by a loving family, and she and her brother, Zach, now seem to be working on the same page, making them a formidable team. The same could be said of her relationship with her love interest, Drew. Although still very much a romantic couple, the focus this time is more on their working together as a team. Thumbs up for Drew recruiting his brother, Luke, to the cause. I liked the siblings’ dynamic in the previous books and enjoyed their being back together in this one. All these characters are likable and engaging people.

One of my favorite things about this trilogy is the interactions Claire has with the projections (ghosts), and there are appearances by some famous names who are still hanging around town. The projections always seem to have entertaining quirks as they stay tethered to whatever spot they’ve felt was important to them during their Earthly life. I enjoy how the principals seek out these lingering spirits to get the low-down on what is happening in the city.

If you’ve been following the story (and you need to have read BOTH of the previous books in the trilogy to understand what’s going on), you know that Claire is still trying to discern the depth and breadth of her sensitivity and acumens. This thread is full of surprises in this book, with twists that made me gasp! Claire is such a good-hearted person, and protecting the projections from harm, especially unethical living human beings, is always foremost in her actions. That continues to be her goal here, along with saving the rest of the world from the bad guys.

And speaking of bad guys, all the old enemies return for this finale, and they haven’t gotten any nicer. The author has created evil characters that I looked forward to Claire besting at their own game. The plot is a nail-biter at times, though!

I recommend GHOST AGENTS: RETRIBUTION to readers who have read and enjoyed the previous books in the trilogy and the entire GHOST AGENTS TRILOGY to cozy mystery readers who like a paranormal foundation to their stories. 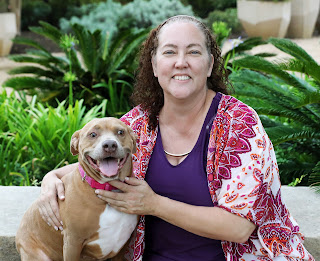 Nita DeBorde is a published author and teacher from Houston, TX. Writing and teaching are her two major passions, though traveling and being dog-mom to a crazy Staffordshire-Boxer mix named Mabel are high on the list as well.

Nita has taught high school French for more than 20 years and absolutely loves her "day job" job (about 95% of the time). She loves to travel, and not surprisingly, France is her favorite destination, though her home state of Texas runs a close second.

She is also a huge history buff, which comes through in her fiction writing, and particularly in her Ghost Agents Trilogy, a collection of genre-defying, cozy paranormal mysteries with a little sci-fi and romance thrown into the mix. Ghost Agents: Retribution, the 3rd book in the Ghost Agents Trilogy, was released on October 22, 2022.